The pre-eminent I. Sherman Greene Chorale, Inc., recognized locally and nationally as one of the leading exponents of choral music, was officially founded in 1972 following a successful concert which featured a choir comprised of some of Mr. Greene’s former Booker T. Washington High School students in an outstanding performance of “Hiawatha’s Wedding Feast” by Samuel Coleridge Taylor. 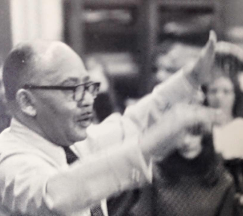 Mr. Greene, a distinguished and masterful musician, set the standard by which the Chorale would earn its status as one of the most renowned choirs in the Hampton Roads area, giving birth to a legacy that has been perpetuated through the years. When illness precluded Mr. Greene’s further tenure as Director, Dr. Carl Wheatley Haywood, assumed musical and administrative leadership of the Chorale. Dr. Haywood, a master musician, conductor, and arranger, not only continued Mr. Greene’s legacy of excellence, but took the Chorale to new musical heights.
Following Dr. Haywood’s retirement in August, 2004, the Board of Directors appointed Mr. Terry William Butler as Music Director. Mr. Butler, a proficient organist, pianist and conductor, embodied the spirit of his predecessors, but also possessed his own vision for the Chorale. Under his direction, the Chorale expanded its performance venues, broadened and diversified its repertoire, and added current and former NSU students to its membership.

The Chorale’s 40th Anniversary Season in 2011-2012 was celebrated under the leadership of Dr. Sheila M. Harleston, the Music Director newly appointed by the Board of Directors. Under the leadership of this master musician, conductor, pianist, music educator, and mentor, the Chorale gave an outstanding repeat performance of “Hiawatha’s Wedding Feast” by Samuel Coleridge Taylor, and further diversified its repertoire and membership.

Ms. Elizabeth Eccles, who retired after an outstanding career as music educator on the high school and university levels, assumed the position of Music Director following Dr. Harleston’s departure. Her conducting skills and experience as a choir director, combined with her love for the Chorale, made her the perfect musician to lead the Chorale in carrying on Mr. Greene’s legacy.

The finale of Dr. Harleston’s tenure as Music Director was followed by the prelude of Ms. Elizabeth Eccles’ leadership in that capacity. Ms. Eccles, outstanding musician, educator, conductor, vocalist, and mentor led the Chorale as it sang music from several genres and attracted music lovers from far and near.

Following Ms. Eccles’ retirement in 2021, the Board of Directors appointed Dr. Roy Belfield, Jr. as Music Director. Dr. Belfield, master organist, pianist, and music educator, had previously served as accompanist for the Chorale. Unfortunately, the Pandemic of 2020 and new career opportunities for Dr. Belfield precluded the fulfillment of goals that he had established for the Chorale and he resigned in June, 2021.

The success of this outstanding choir can be attributed to the vision of its distinguished founder, Mr. I. Sherman Greene; to the unwavering dedication of the Music Directors and Executive Directors, past and present; to the committed, talented, and faithful singers; to the dedicated and supportive Board of Directors; and to the financial and moral support of community patrons, all of whom combine to perpetuate Mr. Greene’s legacy through the provision of a wealth of aesthetic, rich, and diverse choral music experiences.

New voices are always welcome. To schedule an appointment, email us at isgc50th@gmail.com

With the slogan, “Enlighten! Energize! Inspire!” as its theme, the Chorale’s mission is to promote I. Sherman Greene’s legacy of musical excellence through choral performances of time-tested and contemporary music.

I Sherman Greene Chorale © 2022 All Rights Reserved | Site by CCM